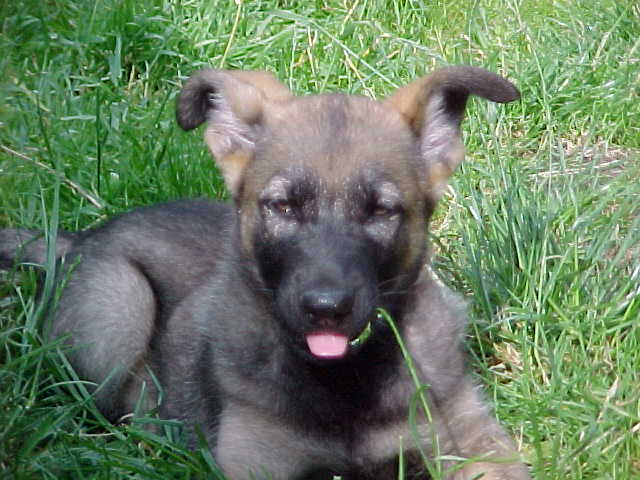 Hallo,
my name is Alice von der Siebengebirgsperle, but right now everybody calls me Krümel (crumb), because I'm small.
I was born on May th 1st 2002. Most of the day I eat, sleep and drive Mara crazy by chewing up eyerything I can get between my tiny teeth.
On sunny days I love to play outside. Have a look at a few pics.......(08/28/2002)

In the meantime things have changed. Now I am a young lady and nobody is going to call me crumb. Now everybody calls me "monster" (as if that would be better...) Maybe it's because of my behavior. Sure, it isn't nice barking at the mailman, but it's his own fault. The way he treats me isn't the nicest either. My favorite mailwomen is the one who delivers all the packages. She always has some treats and plays with me.

I also took my first test. In April we try Schutzhund 1. That is real fun. You can bark at somebody as long as you like and after that you also allowed to bite in a big arm. The only thing I don't like is tracking. Here they go, throwing food in the mud and I have to pick it up. Wouldn't it be easier to give it to me in a nice clean bowl?? (03/24/2004)

Now Mara is totaly out of her mind. In the beginning of April she let me search through the field for Schutzhund 1. Sure, we got a cup for Schutzdienst, but now she want`s to get another one. Just because she want's a wannabe trashcan, I have to work. Then she told me, that I`m getting a little brother. What for? Can't I get a new ball or something more useful? Well, I'll wait an see. Just hoping he's not getting on my nerves to much... (05/13/2004)